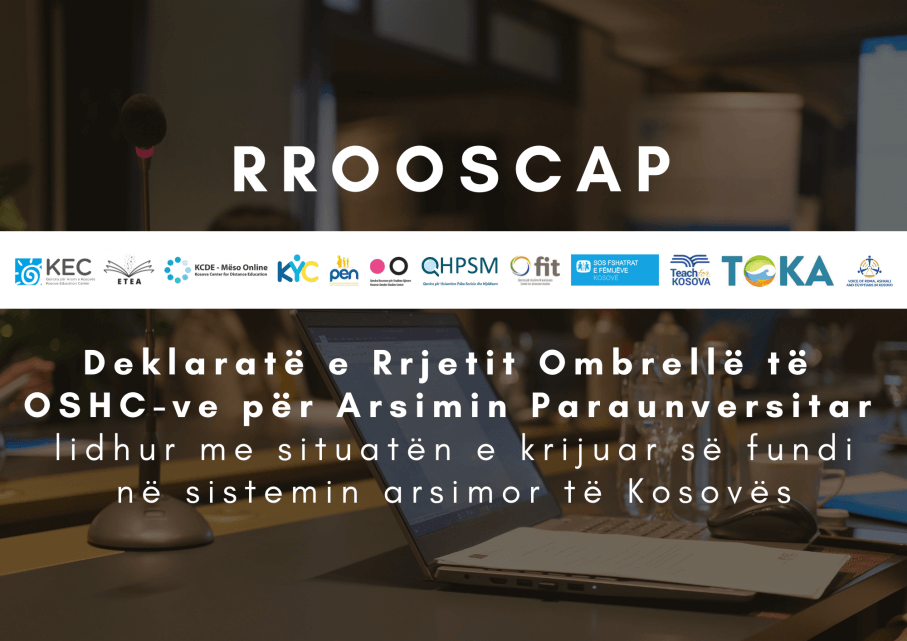 The Umbrella Network of Civil Society Organizations for Pre-University Education (RROOSCAP) is following closely the latest developments in Kosovo’s education system, which are as a result of the lack of dialogue among relevant actors. The Decision of the Government of the Republic of Kosova to distribute additional financial tools in April 2022 without any preliminary consultation with the relevant parties, has barricaded the United Education, Science and Culture Union (SBASHK) to enter into a general strike, risking a total blockade of education from 20.04.2022. On the other hand, after publishing the report with worrying results regarding pupils’ perceptions of the quality of education, the Kosovo Students’ Council (KNK) is expected to march in 29 Kosovo municipalities with specific requirements for increasing well-being and quality in education.

The network urgently invites the Office of the President of the Republic of Kosovo (ZPRK) to be involved in this middle by raising the problem in question nationally through the establishment of the National Council for Quality in Education. This is with the aim of facilitating communication between the parties that have now blocked every channel of communication between themselves and preventing actions that further deepen the crisis in education. The network encourages the Office of the Prime Minister of the Republic of Kosovo, the Ministry of Education, Science, Technology and Innovation (MASHTI) and the United Union of Education, Science and Culture (SBASHG) to rethink current positions and positions by opening up for discussions and finding optimal solutions to avoid whatever action goes to the detrimental of Kosovo students.

In this case, the network supports and stands behind the demands of the Kosovo Students’ Council (KNK) that relate to the return of national attention to issues related to education, specifically increasing the well-being and quality of education in Kosovo. In fact, it is the last moment, now even surpassed, to precede and put the spotlight on improving the state of education in Kosovo, and this applies to all institutions and all other state and social acts that in one way or another have influence on Kosovo’s educational-educational system.

Network member organisations recognise the right of the United Education, Science and Culture Union (SBASHG) to more dignity salaries in all sectors, including here in the education sector. But it is not right and correct at all to do so by further endangering the whole of the teaching process and it is completely unacceptable to do so on and on the backs of students. Therefore, we insist on SKOB to replace the strike with other trade union means that express discontent and articulate the respective demands of karshi institutions.

Finally, the network consisting of the Kosovo Education Center (KEC), the organisation ETEA, Kosova Center for Distance Education (KCDE), Kosovar Youth Council (KYC), Peer Educators Network (PEN), Kosovo Centre for Gender Studies (QKSGJ), Centre for Psycho-Social and Medical Research (QHPSM), FIT Advanced Studies Centre, SOS Children’s Villages Kosovo, Teach For Kosovo, TOKA organization and Voice of Roma, Ashkali and Egyptians (VoRAE) – expresses the respective willingness to offer any relevant assistance and expertise to all the aforementioned parties regarding the initiation of dialogue, the establishment of the “National Council for Quality in Education” and preventing the deterioration of the situation in Kosovo’s education system.