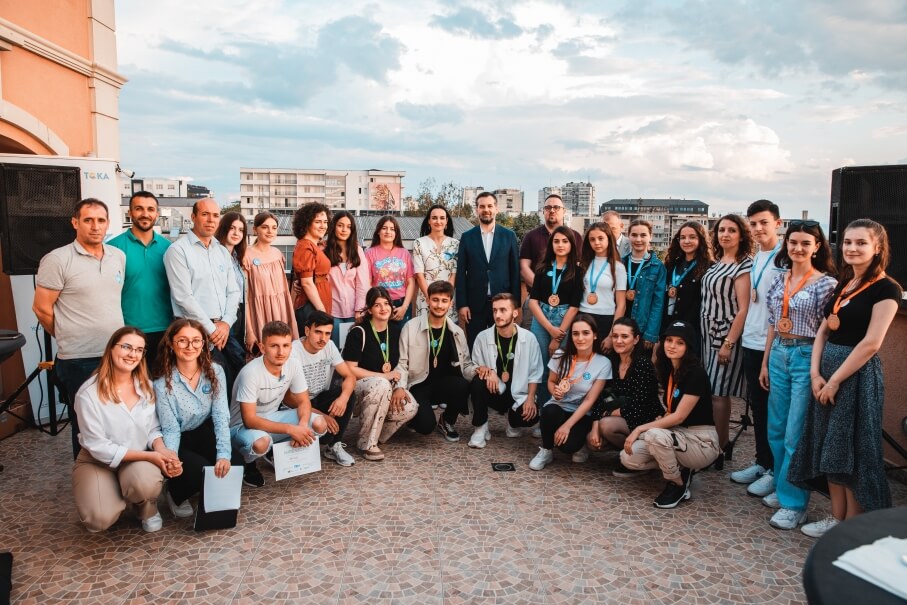 Through an official ceremony, the call for projects for the Youth Competition for Change has come to an end. As part of this competition, 108 young activists applied with 27 project ideas on the topics of human rights, environment and education. The 3 winning ideas were awarded with financial support as follows: First place – 400 Euro; Second place – 250 Euro; Third Place – 120 Euro.

The award ceremony was held at Innovation Center Kosovo, attended by the Executive Director of TOKA, Jehona Gjurgjeala, Minister of Culture, Youth and Sports, Hajrulla Çeku, “Human Rightivism” Project Manager at Community Development Fund, Artan Avdiu, TOKA’s partners and friends and all the young boys and girls who have been selected with their ideas in the Youth Competition for Change.

Sharing her experience with TOKA clubs and her contribution to the community through various projects, the event was opened and moderated by Sibora Kaçuri, former camp participant, former Super-Volunteer and now, TOKA camp educator.

Welcoming remarks were made by the Executive Director of TOKA, Jehona Gjurgjeala, who welcomed all those present, revealing the story behind TOKA and the ongoing mission to create new opportunities for Kosovar youth.

All these initiatives wouldn’t be possible without the support of donors. The Swedish International Development Cooperation Agency (SIDA), through its Human Rightivism Program and Community Development Fund – CDF, has been supporting numerous youth and community projects and activities for 3 years in a row.

Artan Avdiu, “Human Rightivism” Project Manager at CDF, spoke about this issue, emphasizing the importance of such events and the impact created by youth initiatives.

Another supporter of TOKA programs is the Ministry of Culture, Youth and Sports, which during 2021 co-financed 5 training camps, which benefited 150 new participants. In this regard, Minister Hajrulla Çeku greeted all those present, wishing to have more similar projects where young people lead change in the community, and pledged support for the TOKA Youth Leadership Program.

The event continued with the highlight of the night – the announcement of the winning ideas.

The second place went to the group “Seekers”, from Prishtina with members Ylli Rakipi, Rrezon Zhinipotoku and Lendita Humolli. This group will organize fairs for the sale of products produced by women survivors of violence, screenings of educational documentaries, discussions on dealing with cases of violence and theatrical performances with a theater forum. The institutions that will be involved in this project are the Municipality of Prishtina, Artpolis, ETEA, Shelters for women, CC4LADY, and the Department of Social Work at the University of Prishtina.

The third place went to the group “Ndryshimtarët e Rinj” from Malisheva with members Alisa A. Mazreku, Florida Hoti, Diona Hoti, Andi Mazreku and Alisa Mazreku. The group will organize a workshop on short films from the “Prix Jeunesse International Film Festival” and the producing of a short film as part of an awareness campaign. The institutions that will be involved in this project are SHFMU “Ibrahim Mazreku” and the directorates of education and culture in the municipality of Malisheva.

The celebration didn’t end yet! In addition to the first 3 places, the ideas that took the 4th and 5th place were also awarded.

The group “Dielli” from Hani i Elezit with members Artan Asotiqi, Luan Krasniqi, Arsim Vila and Jehona Bela, won the 4th place. This group applied the idea of ??accumulating atmospheric water from the halls of the gym to the school reservoir in order to save water and electricity. On this occasion, the Directorate of Education of the Municipality of Hani i Elezit committed a minimum of 100 Euros to this group for the implementation of their idea within the Memorandum of Understanding with the organization TOKA.

The 5th place went to the group ‘Vajzat e Mjekësisë” from Podujeva, with members Rona Halili, Vesa Veliu, Erisa Ramadani, Erjona Rrahmani and Arnisa Hoxha. This group will carry out an awareness campaign on the use of bicycles and respect for public spaces in their municipality. In this regard, the Municipality of Podujeva and the Directorate of Culture, Youth and Sports in the Municipality of Podujeva, has committed 100 Euros for the implementation of this project in their municipality.

After the awards, the party continued while Tringa Sadiku played her amazing music.

The Youth Competition for Change is organized for the first time and aims to identify and implement projects on the topics of human rights, environment and education, as well as to promote youth activism.

This activity is part of environmental activities, funded by the Swedish International Cooperation and Development Agency (SIDA), through its “Human Rightivism” Program, and implemented by CDF and TOKA.